The Shanghai Ballet present their fabulous interpretation of Jane Eyre at the London Coliseum from 14th August to 17th August 2013. 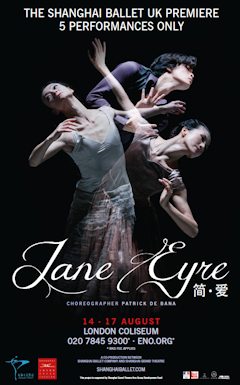 Shanghai Ballet Company is to make its highly anticipated UK debut in August at the London Coliseum with performances of JANE EYRE, an original, innovative ballet production based on Charlotte Brontë’s famous novel. In a bold re-interpretation, choreographer Patrick de Bana’s production puts the character of Bertha Mason, Edward Rochester’s ‘mad’ wife, famously locked up in the attic for most of the novel, firmly centre stage along with her two-timing husband and the novel’s heroine, Jane Eyre.

A classic piece of Victorian fiction, JANE EYRE is a hugely popular book in China with its tale of female empowerment, romance, tragedy and redemption; in 2009 it was performed at the National Grand Theatre in Shanghai as a play; scriptwriter Yu Rongjun had wanted to develop Bertha’s character but the idea was considered too unconventional. Step in Shanghai Ballet Director Xan Lili: “After seeing the play I had an idea that JANE EYRE could work very well as a modern ballet; elegant and graceful. The conversations were just so suitable for pas de deux. I thought it would be wonderful if we could present it as an innovative ballet with universal appeal and one that would simultaneously strengthen Shanghai Ballet’s modern repertoire.”

Xan Lili discussed the idea with Shanghai Grand Theater and with Yu Rongjun, and gradually gathered together the creative team – including celebrated choreographer Patrick de Bana, writer Yu Rongjun, and set/costume designer Jérôme Kaplan – to discuss the plot, design and casting before getting the production underway.

Patrick de Bana views Rochester less as a hero and more as a villain; a man who ignores his poor mad wife so he can attempt to marry Jane. “The only victim in this story is Bertha,” he says. “All she wants is love. We don’t know under what circumstances she became mad, but since then she has been locked up like an animal in a cage; that’s why I wanted to give her some credit and make her important. Bertha Mason is definitely my heroine.”

JI Pingping – Jane Eyre Ji studied at Shanghai Dance School and has danced main roles with Shanghai Ballet Company in The Nutcracker, Swan Lake, Giselle, Coppelia, The Last Mission of Marco Polo, La Valse and many more. She won the Gold Medal at the 9th Paris International Dance Competition (Classical) and performed in Seoul at the first Asia Ballet Festival in 2006

WU Husheng – Edward Rochester Wu joined Shanghai Ballet after graduating from the Shanghai Dance School in 2003; he has danced in Swan Lake, La Sylphide, Coppelia, Romeo & Juliet, Giselle, The White-haired Girl, The Butterfly Lovers, and modern pieces Conversation with Chopin, Web5, The Song of the Mother and more. His many awards include silver at the 9th New York International Ballet Competition, gold at the 4th Shanghai International Ballet Competition, and Shanghai Dance Association’s Outstanding Young Dancer award in 2011.

Patrick de Bana – choreographer Patrick is a graduate of Hamburg Ballet School; he has performed with Bejart Ballet, Compania Nacional de Danza of Spain and formed his own company, Nafas Dance in 2003. He has worked extensively in the worlds of tango, fado and flamenco; he has choreographed many ballets including Cléopâtre – Ida Rubinstein for Andris Liepa’s Les Saisons Russes which performs at the London Coliseum in July 2013.

Jérôme Kaplan – set and costume design Jérôme was born in Paris and has designed sets and costumes for numerous ballets including L’enfant et les Sortilèges, Roméo et Juliette, Cendrillon (Cinderella), Casse-Noisette Circus, and in 2009 Scheherazade for Les Ballets de Monte Carlo. He created costumes for Raise the Red Lantern staged by director Zhang Yimou for the National Ballet of China in Beijing; The Prince of the Pagodas for Strasbourg Opera and In the Mood for Love for Shanghai Ballet. He has worked with ballet and opera companies in Korea, Finland, Stockholm, Moscow, Amsterdam and the UK.

Nick RONG Rongjun YU – librettist Nick Yu is a professional playwright and deputy general manager of the Shanghai Dramatic Arts Center. He has written more than 40 works for stage and screen and was attached to the Royal Court Theatre in London in 2008. His plays have been presented in English, Turkish, Japanese and in many countries around the world. Since 2005 he has also been chief director of the Shanghai International Contemporary Theatre Festival.

Shanghai Ballet Company (director XIN Lili) was founded in 1966 and gained its current name in 1979. The company is part of the Shanghai Grand Theatre Group and performs a blend of traditional and Western dance styles. One of their best known works is The White-haired Girl which won the Gold Medal of the Best Classical Dance Works of the 20th Century in China which helped established the company’s predominant position in China’s ballet world. Since then Shanghai Ballet have created and staged numerous productions and have won an impressive haul of medals for its young dancers. The company actively participates in cultural exchange with artists and companies throughout China and abroad and is looking forward to its UK debut in August.