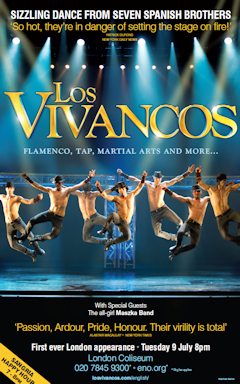 The West End’s temperature is set to soar this summer as seven brothers with model good looks and killer dance moves make their London stage debut.

With rippling torsos and lightning fast footwork, Los Vivancos ooze passion and macho attitude from every pore. They have fast become one of Spain’s biggest global success stories, dancing up a storm and winning standing ovations from more than a million people to date.

Now it’s London’s turn to fall under their spell as they premiere Los Vivancos: Aeternum, a good-versus-evil story set in the world of the paranormal and supernatural with the brothers playing angels, demons and vampires, at the London Coliseum for one night only on Tuesday July 9.

The choreography in Los Vivancos: Aeternum mixes fearless flamenco with ballet, martial arts, tap dance and a sprinkling of magic. The brothers have also composed the music in the show, a fusion of flamenco, rock and
classical sounds. Los Vivancos play instruments on stage and are joined by seven female musicians, the Maszka Band, from Budapest. With costumes ranging from traditional to contemporary and lots of bare flesh on show, Los Vivancos: Aeternum is a spectacular, unforgettable production.

As young boys growing up around the world, Aaron, Cristo, Elias, Israel, Josué, Josua and Judah Vivancos learned to play instruments and created exciting acrobatic routines to show off their talents in special performances for their family. After graduating from the Professional Conservatory of Dance in Barcelona they went their separate ways to study with international dance companies, including in England, Canada, France and Holland. They reunited back in Spain in 2006 and formed Los Vivancos. Today the group has grown into an award-winning global brand that has seen the band of brothers perform in 73 cities in 34 countries. Now they have the West End in their sights!